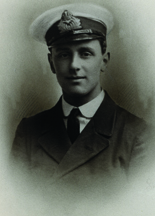 'On leaving School, where he displayed considerable mechanical aptitude, Richard Bush went to St. John's, Cambridge, but left there for Canada without proceeding to a degree. On his return home he studied architecture for six months. When war broke out he joined the Artists' Rifles, from which he obtained a commission in the R.N.A.S. A bad accident after 17 months' flying incapacitated him for a time. Returning to duty he was given the command of a new seaplane station. Here, while taking a flight he failed to clear some overhead wires, his machine was smashed against the cliff and set alight. With great pluck and coolness he kept the men who had rushed to his assistance at a distance, as there were still unexploded bombs in the burning machine. But the shock was too great and he only lived 36 hours'. (Malvernian, Jun 1917).

Gained Aviators Certificate on 20 August 1915 at Royal Naval Flying School, Eastchurch. He was one of the first airmen to be based at Fishguard Naval Air Station RNAS, and on his first flight there took off in a Sopwith Baby seaplane, N1033, which had been fitted with a new engine, on the morning of 22 April 1917 on a test flight, carrying a full load of bombs, but the seaplane failed to gain height at take off and struck power cables, which sent it crashing into the cliff face. Two 16 pound bombs exploded. Pilot was Badly Burnt.
Biography at Canada at war
RAF Museum
Final Flights