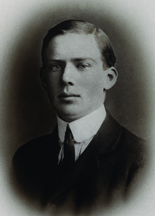 'On leaving school he trained with the Inns of Court O.T.C., and before going to India in 1912 as Assistant Manager of the Indian Branch of the Oxford University Press, he was gazetted Second Lieutenant in the Special Reserve of Officers. On the outbreak of war he volunteered his services as Sergeant pending his being gazetted to a regiment, and served in France throughout the autumn and winter. He was gazetted Second Lieutenant 3rd South Wales Borderers in February, and in May, having been attached to the 2nd Battalion of that regiment, joined in at the Dardanelles, where he fell on June 19th.' (Malvernian, Jul 1915).