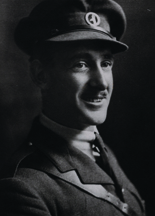 'Ardagh Cassidy brought with him from South Africa an ease of manner and conversation that made him a cheerful companion. He was a boy of great activity and was particularly prominent in the Gymnasium. In this war he served first as a Private in the German West African Campaign, during which he was twice slightly wounded. When that was over, he trained for a commission and was sent to German East Africa, where he contracted dysentery and was invalided from January to May 1917. After the battle in the following July he was seen to be wounded and walking back to the dressing station. No further details have come to hand.' (Malvernian, Nov 1918)