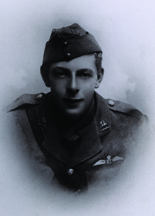 'Owing to the outbreak of war Caunter left School earlier than he had intended, passed through Sandhurst and joined his father's old Regiment—the Welch—at the end of 1914. After serving on the Eastern and Western fronts, he joined the Flying Corps, and had only been with them a short time when he was shot down, on October 25, 1917. At School he was a boy of more than average merit, a promising bowler and a good shot. These qualities he turned to good account in the war, showing considerable ability as a pilot and giving promise of greater things to come.' (Malvernian, Dec 1917).

Joined 1st Btn Welch Regiment in the field on 8/10/15.
Disembarked at Salonica via Marseilles & Alexandria on 27/11/15.
Embarked for Egypt on transfer to RFC at Salonica on 26/11/16.
Killed in action on Passchendaele Ridge.