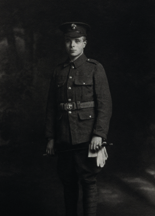 'As a boy at school he rose to no great distinction either at work or play, but his downright honest nature made him respected and popular. He joined the H.A.C. as a private at the beginning of the war, and had more experience of trench warfare than most people. Except for a short leave after being wounded, his active service was without a break for over two years, and he had been promoted to Colour Sergt.-Major. He was mortally wounded on November 13th, and died the next day.' (Malvernian, Dec 1916).