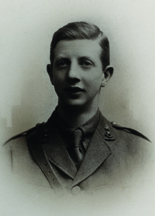 'Although he left Malvern rather young, his abilities and industry had already secured him a high place in the School, and those who had watched his progress here fully expected that he would do well in his later career. In July 1914 he took the degree of Bachelor of Science at Bristol University. He obtained a commission in Jan. 1915, and went to France in the following October. He was wounded twice before he received the wound from which he died. He was mentioned in despatches on Dec. 17, 1917, and was awarded the Military Cross on May 28, 1918.' (Malvernian, Nov 1918).

Military cross citation: 'While in command of the company during enemy attacks he showed great coolness and ability in command of his men, and on the third day was dangerously wounded while distributing them in a new position. His example throughout was of a high order.'

May 27th 1918. Chalons le Verguer. The sections and attached infantry, commanded by Capt R H Collyns RE left under orders to report to 110th Inf Bde and thereafter came under the orders of the 64th Inf Bde and were detailed to act with 15th DLI in holding the line of the light railway west of Cauroy.

May 29th 1918. Capt R H Collyns RE severely wounded holding main line of Railway at Muizon on the Vesle River.

Died of wounds received in action on May 29th 1918.
Memorial in Dulverton Church.