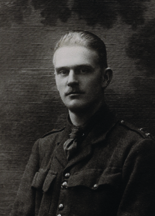 His elder brother died at Eton.

'He went out to the front early in the war, and was sent home wounded in October. On recovering he returned to Flanders and was killed in action on April 15th. He was the fifth Baronet and head of one of the few families existing alive to trace in the male line direct descent from a family of the same name well known in Normandy, who came over with William the Conqueror. ' (Malvernian, Jun 1915).

He was killed just south of Givenchy in the retreat from Mons.

He was due to be married at Moreton Corbet Church. There is a memorial tablet on the South Wall.
Livesofthefirstworldwar Biography on Fickr