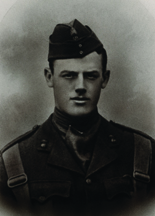 'At Sandhurst he was appointed a Cadet Officer and obtained a Blue for Running. In Jan. I914 he was commissioned to the 2nd Bn. of the Royal Dublin Fusiliers, and in July was transferred to the 1st Bn. at Madras. In March of this year he was promoted Lieutenant and was made second officer in charge of the Machine Gun Section. He was killed in action at the Dardanelles on April 28th. He was a boy of an affectionate nature and many sympathies, shown not only among school-fellows but also in the social work to which he devoted part of his holidays, and his power as a leader combined with a striking natural courtesy rendered him an exceptionally successful Head of his House. ' (Malvernian, Jun 1915).