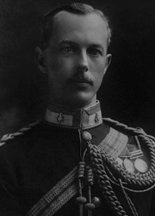 'In September 1914 he gave up his appointments at home to join the Army in France on the Staff of the Indian contingent. In 1915 he was transferred to become Chief Staff Officer of a Division. On August 18th, 1916, he stayed on in the trenches with characteristic thoroughness, to observe some operations which he had directed, and was hit by a stray bullet. He died instantaneously. The brief record which is given above of Colonel Longridge's twenty-one years' service is sufficient to show that in him the School has lost one of her most distinguished soldier sons. That, if merit met with due reward, he would reach a high position in the Army, was confidently predicted by those who had, in his youth, observed his outstanding qualities of mind and character. He impressed men by his quiet strength and steadfast purpose, his acute and penetrating intellect, his unwearied devotion to duty, his courtesy and charm of manner. Some idea of the estimate formed of him in high places is given by the following extracts from letters written by Generals and public men under whom and with whom he served.
"He was an exceptional man and a splendid staff officer. His division and all who knew him respected him greatly."
"To the Indian Corps he was invaluable. . . . He seemed assured of a career of great distinction. We can ill spare men of his worth."
"In him the Service has lost one of its most distinguished officers."
"His ability, his indefatigable love of work, and his devotion to his profession and scientific equipment for it, marked him out, had he been spared, for high eminence."
"The country has lost one of the very best officers we had. . . His grasp of broad principles was only excelled by his extraordinary mastery of detail. . . . His was a splendid character, including courage of the highest order, ceaseless perseverance, tact, and great ability."
We are authorised by Lieut.-Colonel Sir Maurice Hankey, K.C.B., Secretary of the Committee of Imperial Defence, to state that, in the years preceding the war, Colonel Longridge did invaluable work in connection with the arrangements for the preparation for war. The value of Colonel Longridge's work in this respect was fully recognised by the Prime Minister and the Committee of Imperial Defence, and was rewarded with a C.M.G. Nowhere is Colonel Longridge's death more deeply felt than in the Committee of Imperial Defence and among his colleagues in the Secretariat, who not only placed the highest value on his professional attainments, but were united to him by bonds of intimate friendship.' (Malvernian, Dec 1916).